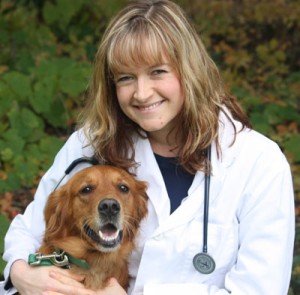 It was a cold February day and the end of a long work week. My husband and I both had just come home from work. In our garage sat a dark red golden retriever female dog about a year of age jumping up and down and very excited to see us.

I searched up and down the road to see if there was a trail of dog prints leading to our house from one of the neighbors’ houses. It was like she had come from nowhere. The dog very happily ran inside the door of our house and made herself at home. She had a recent spay scar, so I called every veterinarian office in our area to see if they had just spayed a young golden retriever. Not a single vet recognized the dog.

She had no tags and no microchip. I called every dog control officer and left information with our town clerk if anyone happened to call looking for their missing dog. The days went by and nobody called to claim her. We pretty much had decided at that point that this happy red dog that was just dropped in our driveway was going to stay with us.

The color of this sweet dog was the color of the chili powder that we put in our famous chili. We started calling her Chili Dog and the name stuck. Chili dog immediately became attached to me. She started acting protective of me and growled at my husband when he came near me. She started growling when anyone came close to her on the couch. Immediately we put a stop to it.

No more furniture, no more protecting me. From then on she had to stay on the floor and learn that she was not allowed to guard the furniture or guard me. We also found that whenever we would have family parties or get togethers, she would get over stimulated and sometimes would lash out at our guests. We found that we had to separate her during these get-togethers and remove her from the situations.

Many times we thought of re-homing her but each time it seemed we were able to work through her anxieties and her issues. She grew older and learned to get along wonderfully with Caden our oldest son. She was there for our next two children’s births. As the years went by, she became a better and better family dog and eventually would let the children do anything to her. She also was able to become part of our family get-togethers and children’s birthday parties again. She loved walks and accompanying us to the barn. She accepted our next two dogs Maizy and Jake as puppies with no issues.

As she approached eight years of age, we noticed she was slowing down a bit. She started having more and more difficulty on our walks.

I took her to my clinic for a workup and found that she had hip dysplasia. Her hips never fully sat properly in her hip joints causing instability, pain, and arthritis. She probably had it from birth from poor breeding. I knew it was starting to cause her pain because we would only make it part way on our hikes and she would turn around and head home when she had enough. We started her on a diet, specifically for the joints, and after two months we noticed a huge difference! She was making the entire walk again with us! 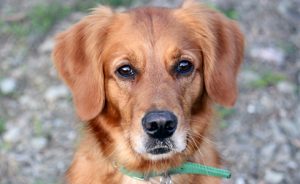 Chili is now 10 years old and has become the old faithful farm dog. She will spend all day lying in the sun under our maple tree. Her face has grayed and she has been living a happy life these past couple of years. But over the past few months, I knew something was off with her.

I thought it was her hips bothering her again. I kept telling my husband I was going to start her on stronger pain medication and take her to the clinic for more testing. Then three weeks ago she collapsed. We had just finished up barn chores, and started heading inside; then I saw her. She was lying flat in the mud beside the horse trailer. I ran over to her immediately and looked at her gum color.

Her gums were a very pale pink. At that moment I knew she had started bleeding internally, most likely from an abdominal tumor. That evening our whole family headed up to my clinic to do some tests and to possibly say goodbye to Chili dog. The ultrasound showed a large mass on her spleen with a small amount of blood around the mass. Her blood work however, showed that she was not bleeding that badly; she only had a slight anemia and at the clinic she started to perk up again.

My kids and husband asked me to try and do surgery on her. Chili came home with us that night and came back with me the next morning to work. I had Chili and my family counting on me. We took her to surgery and I found the large mass in her abdomen on the head of her spleen. This mass was adhered to all the surrounding important organs including her stomach, her liver, her left kidney, and her pancreas. I started to lift the mass out and she immediately started bleeding.

I had to quickly pack off the bleeding spleen, take some calming breaths, and say some very urgent prayers to God above. I advised my staff to start a concentrated saline drip to bring her dangerously dropping pressures up.

In that moment I knew I had to take a different approach. I started tying off the vessels of the tail of the spleen and I tied off as many large vessels as I could before I had to lift the giant bleeding mass out of her abdomen. Then, very quickly, I lifted the spleen out, broke down the adhesions, put the pancreas back in place, and tied off the remaining blood vessels. Chili needed another concentrated saline bolus and we started waking her up. She was waking up very slowly and her blood pressures were still low.

Her red blood cell count showed she had dropped significantly from the surgery. Karma, Alex, our technician’s dog, was brought into the treatment area and very willingly gave us her blood for Chili. By that evening and after the blood transfusion, Chili was jumping up on the kennel door ready to go home!

The first day Chili’s body consumed all of Karma’s red blood cells. Then Chili started making her own. She has been doing wonderfully and it is like we have given her a new life. The biopsy results have come back and they were what I suspected. Hemangiosarcoma is a very aggressive cancer that we lose many Golden retrievers and other older dogs to.

She has 4 – 12 months to live before the cancer will return; but she is like a puppy again feeling so well! Losing her will be one of the toughest things my family will endure. She is the first dog to be with us as each one of our children has grown up. This red dog that God brought into our lives at the right time has made our family whole.

We will spoil her and love her as much as we can in these next few months. We will give her whatever treats and food that she wants and we will always be grateful for the time she has been with us!