During the fall of 1972, my parents met in the registration line at the Edinboro University of Pennsylvania. They both wanted the same thing – to get married and start a family – and they both shared a great love of animals. They became instant friends and started dating after they car pooled back and forth to their homes in Pittsburgh together.

That same year my mom had been given a tiny orange tiger kitten named Copper. She tried to keep the kitten in her dorm room, but one of the girls turned her in for not following the rules. The men’s’ dorm, however, was a different story. The men tended to pat each other on the back when the rules weren’t followed. Therefore, my dad took the kitten and kept him in his dorm room.

Copper grew to be a large handsome orange kitty. During this time, he would ride around on my dad’s shoulders when he walked across the campus. Eventually, he became too big to ride on my dad’s shoulders, and learned to follow my dad along the sidewalks of the campus. If he happened to wander off, my dad just had to whistle and he returned promptly to his side. Everyone on campus knew Copper and the rules were allowed to be broken because everyone loved the campus kitty! 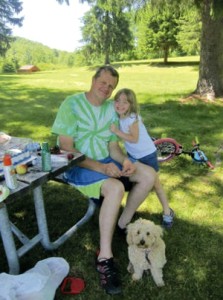 The columnist‚Äôs father poses with her daughter Mickenna and pet Shakespeare.

A couple years later, my dad became a resident assistant, and he knew he couldn’t keep Copper any longer. Copper decided to hitch a ride home that summer to Coraopolis to live with my grandparents Nicolas and Alice. Copper instantly became attached to Grandpa Nick, also an avid animal lover, and he lived out his years happily in the Pittsburgh suburb as my grandpa’s best buddy.

Growing up, my family always had animals. My parents bought a small farm and we raised goats for meat and milk, chickens for eggs, and had horses for riding. I attribute my work ethic, my love for animals, and my success in my career as a veterinarian to my parents for exposing me to animals at such a young age. I feel having pets provides children with a sense of responsibility and a respect for other living things.

When looking for the man who would eventually become father to my children, I had three criteria. This man had to go horseback riding with me, he had to do chores with me, and most importantly he had to have a love for animals as my own dad had.

My husband Daryl fit the above criteria, and we’ve been together for almost 18 years now!

I warned him before he committed to our relationship, that he was marrying a future veterinarian and that there would be many pets that would most likely come into our lives.

I knew he had a love for animals when I saw how he interacted with his own dog Dutch, the beagle. Dutch was a bull-headed beagle that never listened to me, but he loved his dad and Daryl loved him. We had that dog through many of life’s hurdles that Daryl and I experienced together. When Dutch was 17, we had to say goodbye to him.

We now have three beautiful children together and many other pets just like I told Daryl we would have. Daryl is a wonderful father to my children and to all the pets we bring home. Every spring he incubates a group of our chicken eggs and hatches chicks on his own. He makes quite a good daddy to these chicks and it is heartwarming to see him tenderly caring for the eggs and then the chicks once they hatch. He takes on the animal responsibilities and is my true partner in life.

As Father’s Day approaches, I am grateful every day for being raised by a wonderful caring father and for marrying a wonderful man who is the best father to my children and to my animal children as well. As we celebrate Father’s Day, be sure to let that special father know that he is appreciated whether he is a human daddy or a pet daddy! Happy Father’s Day from the Dunkirk Animal Clinic!