A beautiful dark red 10-month-old female Golden Retriever hopped in the car happily wagging her tail. She was extremely excited to be going for another ride away from home. Little did she know that she would not be going back home on that cold wintry February day. The back country road off of the main road looked like a good place to go. The car stopped at the next intersection and the young dog was pushed out the door and left there. She did not know where to go. There was a house across the road but there was a black dog barking at her. The snow banks were too high, so she headed down the road to hopefully find a warm place. By the time she got to the next house she was cold and scared. But there was an open garage door to protect her from the cold. She went inside the garage door, so much like her old home and waited. It seemed like hours but a truck pulled into the driveway; then a car. Out of the vehicles came a man and a woman. The Golden Retriever was so excited to see people! The people were talking. The woman came over and patted her on the head. The door to the house was opened as an invitation to the young dog. In she went and 5 years later she is still living in her new home. We named her Chili dog and she is a member of our family!

A grey kitten named Breezy was born under a porch in the middle of the city. The people who lived in the house did not want more cats in the neighborhood. As soon as the kittens were old enough, they were trapped and taken to the local humane society. There the grey kitten lived for 6 months watching the hundreds of people pass by her cage. She did not have any special markings and she wasn’t overly friendly because of her background. One day a young girl who had been volunteering with the shelter dogs took a walk through the cat area. Her mom was with her and they were looking for a cat to help control the rodents on the farm. The grey kitten would fit in perfectly they thought. She was brought home and put in the barn with a giant hayloft. But farm life was not meant for the grey kitten named Breezy. The other cats on the farm chased her up trees where she would stay for days. One day she was running from one of the other cats and she got her self stuck on the barbed wire fence. The young girl who had always been so nice to her took her to the vet’s office to have her belly stitched where she had been hung on the fence. She could not be put back outside again. Fortunately the girl was going away to school and was able to take a cat with her. Breezy was excited to be chosen and thoroughly enjoyed apartment life away from all the dangers outside. Breezy made her way 10 hours back home to NY and has been living with our family for the past 10 years! 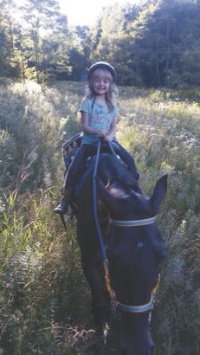 Howie wasn’t a good racehorse, but he is a perfect mount for the columnist’s young daughter.

A young bay standardbred colt with long gangly legs was born to his mother in Indiana on a warm summer day. Howie enjoyed long naps in the grass and playing around his mother. The day came to be weaned and he was taken to a different barn with other young horses. From that point , his training began. He was taught to wear a halter and a harness. He was taught to pull a cart behind him. Eventually he was taken into a large area with a track that went in a circle. He was taught to pull that cart in a circle and go as fast as he could with those long legs. He learned that when the other horses next to him went fast he was supposed to go fast too. But he never had the competitive spirit to keep up with the other horses. He mostly enjoyed going back to his stall and eating his hay. By the time he was 4 years old, he hadn’t won many races. His owner at the time, a very kind elderly man had just raced him in Ohio and he placed near the end of the group. Racing just wasn’t his favorite thing to do. Next thing he knew he was being loaded into a different trailer and headed to a different barn. He was taken out of the trailer by a nice girl and put out on pasture with other horses that looked just like him. Memories came back to him what he was supposed to do with grass pasture. But he wasn’t sure how to fit in with a herd of horses. Howie had been donated to the Starting Gaits Standardbred rescue in Ohio. He was started under saddle and came to live with us shortly after. Within two weeks of coming off the racetrack, he was taking my 5-year-old daughter for a ride. He has learned how to become a horse how to fit in with other horses and be on pasture all day. He is the most gentle and kind horse we have ever owned and we are so glad to have him as part of our family.

Every one of these pets was a rescued pet. Please consider adopting an abandoned pet, a rescued pet, or a pet who needs a new purpose in life like Howie the Standardbred. It could have ended badly for any one of these pets. Many pets may sit in a shelter for weeks, months, and even years. Some kill shelters are so overrun that if the pet has not been adopted, they are euthanized. Many of the retired racehorses become an overworked buggy horse or go to a meat auction. Please consider opening your home and your heart to one of these pets. Please support our local shelters the Lake Shore Humane Society, the Chautauqua County Humane Society, the Northern Chautauqua Canine Rescue, Westfield Stray Cat Rescue, and many other breed specific rescue organizations like Second Chance Boxer Rescue. Give one of these deserving pets a chance!