A special father for a husband

During my dating years, I had three criteria that a guy had to meet in order to deserve another date with me.

1. They had to ride a horse well. 2. They had to do chores with me willingly. 3. They had to love animals as much as I loved animals. My husband Daryl passed these three criteria better than all the others and we’ve been married now for 12 years. For this coming Father’s Day I would like to honor him by writing about how much he means to me and my children!

Daryl was born the youngest of three children. He was raised in a small town and was taught good family values just as I had been. He also learned the importance of a strong work ethic, which is one thing that attracted me to him. Daryl has the easiest going personality. 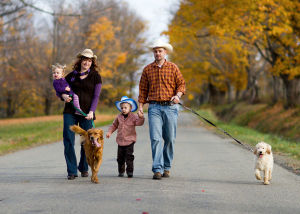 Nothing stresses him or bothers him; he takes each day in stride. We complement each other well as I am the exact opposite of that! He always has endless energy and can keep up with our three crazy children and the farm that we now run. He has always kept a good job and works harder than anyone I know, helping him advance in his career at DFT Communications.

We dated all through college and my time in veterinary school. He took on the family farm chores like a champ and never complained. He even built my mother horse stalls in exchange for my engagement ring he purchased from her store.

I will never forget the day he helped deliver a baby goat. My family raised Nubian goats and I happened to be the only one home at the time one of the goats went into labor. The baby goat was breached with one back leg turned backwards. I couldn’t do anything to dislodge the baby from the mother’s pelvis.

He threw on the gloves, stuck his arm up in there and pulled that baby goat out alive. I knew I was going to marry this guy after that! We married half way through veterinary school and bought an old farm house that probably should have been bulldozed to the ground. He, however, took on the challenge and rebuilt the house, added an addition, and turned it into a beautiful liveable home for us.

When I graduated veterinary school, we finally began our life together as a married couple. I had taken a job as a mixed animal veterinarian and was planning on getting settled in to our new home and my new job. Not one month later, I found out I was pregnant.

Nine months later, Caden Wyatt was born. Caden was a very good baby. He adjusted well to daycare and even went on some veterinary calls with me. He is kind and gentle, gets along with everyone, and is just as easy going as his father. He has artistic talent and is good at building things like his father.

Mikenna Rose came three years later. Mikenna is stubborn like her father and looks so much like him. She has his work ethic and his energy. We thought we were content with two children, but I started to get that itch, the baby itch … should we have one more? One prayer to our Father above to help in our decision and I found out I was pregnant two weeks later. Colton Marshall came along in 2012. He is as busy and active as his father and has his loving and kind personality.

Daryl has been the best daddy to our three precious children and to our animal children as well. He has supported me in all my endeavors in my career as a veterinarian. He never became angered when I brought home yet another animal. He has even started his own projects with the animals, including beekeeping and raising pigs. He also incubates chicken eggs every spring and raises the chicks to eventually become our laying hens.

When we adopted Claire, our abused three-legged Pitt bull puppy, she was scared to death of him. When she first met him, she cowered down in a submissive position and urinated. Daryl very gently kneeled down and talked to her in a calm, quiet voice. She now loves him and plays every day with him when he gets home from work.

I am blessed to have such a wonderful husband and father to my children and my furry children. On this Father’s Day, be sure to thank the fathers in your life. If you are a father, we thank you for all you do and we hope you enjoy your day.