As I drive through my small town, I cannot help but notice the warm glow of the pink light bulbs coming from my neighbors’ porches. I turn on the television and see pink shoes covering the football field. Pink ribbons are everywhere for a reason – it is breast cancer awareness month. Many people are affected by this disease in one way or another. Many have relatives or have known close friends affected by breast cancer. We may have even lost a close friend or relative to this terrible disease. Did you know that animals can also be affected by breast cancer and ovarian cancer?

“Stella” came to the clinic in March as a rescue Mastiff dog being fostered by her now current owners. She was severely underweight and had been having intermittent urinary tract infections . She also had a large mammary mass. At one of her checkups, she had an abnormal discharge, which warranted doing an ultrasound on her abdomen. A large mass was noted in her abdomen, and it was recommended she immediately be taken to surgery. When Dr. Culverwell opened up Stella’s abdomen, to our surprise, she had a large ovarian tumor about the size of a volleyball. It had multiple large blood vessels supplying it, and was adhered to her abdominal organs. Her intestines were completely pushed off to the side.

Hours later and with two doctors’ hands working vigorously, the large ovarian mass and the mammary mass had been removed. Months later, Stella has gained 25 lbs, is living with her owners and looks like a brand new dog! 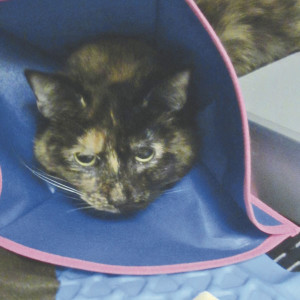 “Mama” an older female tortoise shell kitty, came to the clinic a couple weeks ago with a large ulcerated and infected mass in one of her mammary glands. On further examination, she had multiple growths affecting more than one gland, and the tumors were extending into her lymph nodes. She had been found as a stray cat, and had birthed kittens before her owner had acquired her. She had been spayed since then, but still developed breast cancer. We took her to surgery a week later, and removed three of her mammary glands and a chain of lymph nodes. The surgery was extensive and took multiple staples to close her incisions. Her blood results showed severe anemia and an increased white blood cell count from the infection in the tumor. She is recovering well and will be seen soon for her staple removal.

Because these pets were rescued pets, the owners had no choice in the decision about when to spay them. However, pet owners often can make that decision in order to decrease the likelihood of breast or ovarian cancer in a pet.

The risk of breast cancer in cats and dogs can reduced if the pet is spayed before the first or second heat cycle. The chance is the lowest if spaying is done before the animal goes through any heat cycles. I usually recommend spaying between 4-6 months of age. People who acquire a pet should be aware of the costs associated. Spaying a pet can be costly especially in larger breed dogs. In addition, there may be differences in the cost of a spay for multiple reasons. Blood work, intravenous catheters, pre-anesthetic pain injections, a tracheal tube and oxygen, and a licensed technician monitoring the pet while it is under anesthesia are all things included in the cost of spaying.

Be sure to ask a veterinarian what all is included in the cost of the spay. In all cases, a pet owner not only be save money by spaying at a young age before any complications arise, but may be save the pet’s life!

Remember that October is breast cancer awareness month for pets as well as humans.