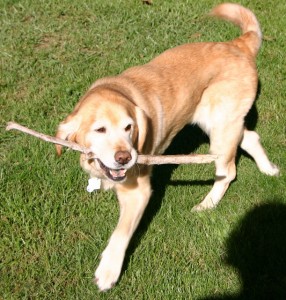 Princess, a 10- year-old yellow Labrador retriever, was surrendered to the Lakeshore Humane Society January 2013. She was emaciated, infested with fleas, and was hairless on a the majority of her body. She was covered with painful sores, had severe ear infections, and had developed mammary masses from a life of rearing puppies. Despite all of her ailments, Princess very happily wagged her tail and asked for belly rubs during her entire visit. We knew there was something special about this sweet Labrador and she deserved a chance after what appeared to have been a long and neglected life. My thoughts immediately went to one of our employees who had recently lost one of her special rescue dogs. Her other dog Grace had severe anxieties and the loss of her companion had only worsened the behavior. Princess had a positive personality and a calming demeanor and I knew she was meant to be in this home. The Lake Shore Humane Society immediately began treatment for her skin infections, ear infections, and skin allergies. Princess went home to live with Grace shortly after. She began to grow her hair back and gain weight. She was turning into a beautiful dog and settled into her new home perfectly. Eventually she was spayed at our clinic and her mammary nodules were removed. It was also discovered that she had a bladder mass which we were able to shrink down with chemotherapy. She is now being maintained on a medication for her allergies and is doing wonderfully.

When looking for a pet to adopt, consider all the benefits of adopting a pet from a shelter. Most of my pets are shelter pets or pets that were dropped off and left behind. Many of these pets are surrendered for human reasons such as a move, a divorce, or an owner’s death. They may also be a stray or abandoned pet that never had the love and the attention they deserve. Here are the top 10 benefits to adopting a shelter pet:

1. You are providing a loving home for a stray, abandoned, neglected, or just homeless pet.

2. You may be adopting a pet that would have been euthanized. It is a fact that over 27 million pets are euthanized every year in shelters alone.

3. You are creating an opening at the shelter for another disadvantaged pet to have a chance to be adopted.

4. You are supporting a great charitable organization and the adoption fee you give to the shelter will help feed and care for other pets.

5. For the majority of these pets, you don’t have to go through a difficult puppy or kitten training phase.

6. Most of these pets are already house trained or litter trained

7 . Because many of these pets have been neglected or abandoned, they very easily transition into a new home and are very appreciative of the love that is being given to them.

8. Most of these pets are already spayed or neutered or can be adopted with a voucher toward the cost of spaying and neutering.

9. Most of these pets are up to-date on their vaccines and have been de-wormed.

10. You are helping with the problem of pet overpopulation!

Consider giving one of these animals a chance and a loving home forever! I have never been disappointed with the pets I have brought home from the Chautauqua County Humane Society and the Lakeshore Humane Society. I see many wonderful pets every day from these organizations and also the Northern Chautauqua Canine Rescue and the Westfield Stray Cat Rescue. If you cannot adopt a pet, consider giving of your time or your resources to help support our local shelters!