A Christmas Journey:¬†Understanding how the Holy Family felt

The semester had just ended. There was an air of excitement and exhilaration in the student body at the University of Illinois, School of Veterinary Medicine as we all packed up to head home for Christmas. Finals were done, and we wouldn’t be back for classes until January. Although it was a long and monotonous trip, I was excited to make the 10-hour drive home across the corn fields of Illinois and Indiana, up through Ohio, and Pennsylvania and finally the last stretch through New York to home. There on our little hobby farm I would see my fiance Daryl, my family, and my pets I had left behind.

It was December 23, the day before Christmas Eve as I packed my clothes, my two bearded dragons Hydra and Drake that I had hand raised from babies, my elderly Siamese cat Angel, and my loyal Papillon Foxy. Foxy sat in the passenger seat while Angel rode in my lap. Hydra and Drake enjoyed sitting on the dashboard right on the heat vents of my 1991 Honda Accord. 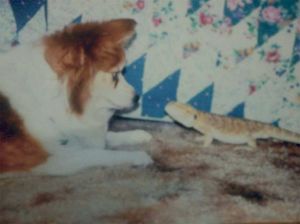 Foxy with Drake, a bearded dragon.

My Honda was the most reliable car I had ever owned. Handed down to me from my Grandma, it made many 600-mile trips back and forth to school. It never gave me any problems and it would prove to me this day its reliability. I had gotten a bit of a late start that morning as my roommate and I closed up our apartment for the break. The first stretch was across Illinois, crossing into Indiana. It was a cool and crisp but sunny day. They were calling for snow in Indiana and Ohio, but a little snow never deterred me after living in the great snow belt of Chautauqua County. It would be about 5 hours to my halfway point, Columbus, Ohio.

The pets were all resting comfortably in their places as we headed through Indiana. It had started to snow as we drove through Indianapolis. After leaving the city, the snow was picking up a bit and the roads were not plowed very well. The whole last half of Indiana, I saw one snow plow and there was no salt on the roads. It was quite dark already due to the snow clouds ahead. As I continued to drive in my sturdy old car, I came upon a truck off the side of the road. Eventually there would be more vehicles off the road as I crossed into Ohio. The snow was coming down harder the farther I drove and the traffic was backing up. It seemed like the Midwest was overwhelmed by the storm and did not have the means to handle the heavy snow that night.

Now this was before cell phones had become a permanent attachment and a necessity. I had yet to acquire and embrace one of these new technological advancements. I pulled off the road to get some gas and called my parents from a pay phone to let them know I wasn’t sure if I’d be making it home that night. I was anxious as it was getting dark and I didn’t know if I should keep driving or make a stop for a few hours. I decided to keep driving. At this point I was somewhere near Dayton, Ohio.

I had put the two Beardies back in their cage, and was grateful I had my faithful Foxy and sweet Angel to help calm me and keep me company as I continued to drive. The snow and the traffic continued to get worse. I looked at my road map and decided to get off the interstate to attempt driving on a road that ran parallel to the poorly plowed highway.

It seems other people had the same idea and soon I came across backed up traffic again. Up ahead of me there was a bridge and a sharp curve in the road. Two cars that had gotten in an accident were blocking the way and a large semi was stuck in the snow right behind the accident. I had no other choice but to turn around and head back to the interstate. I continued to drive going about 30 miles per hour until I was somewhere outside of Columbus, Ohio. By this time it had been about 8 and hours since I had left my apartment in Illinois. 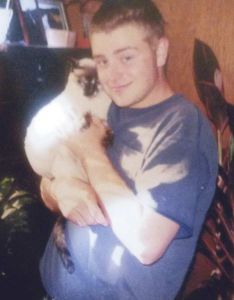 I finally decided to pull off the road and find a place to stay for the night. As I stopped at the well known hotels I was turned down immediately, as there were no rooms available. I continued to drive and see signs that said “No vacancy” I now understood what it felt like for Joseph and a very pregnant Mary those many years ago as they traveled to Bethlehem looking for a place to stay. They were turned down time and time again until the only place left was the stable with the animals. I could just feel their desperation. Weary with traveling the many miles, Mary burdened with aches and pains from pregnancy and possibly the start of contractions as she was to give birth to God’s son that night. I asked one of the hotel staff why there were no rooms. The whole city of Columbus had been without electricity from the storm and people were coming in droves to stay in the nearby hotels and motels.

I was desperate and finally came to the last hotel on that road. It was called the “Best Inn” and looked like a small run-down privately owned hotel. It was my last chance. There was a drive through window to check for vacancy. I drove up trying to hide my pets from their view. I had a pleading look on my face as I asked for a room.

“Yes, we happen to have only a couple of rooms available!” Thank God! I pulled around to my room with my family of pets in tow and had the best sleep that night. The next morning I woke up early and left for home. It took me approximately 3 hours to get north to where the roads would be clear. Coming close to Cleveland, the snow was deeper, but the roads were clear! We made that last stretch home in a breeze. As I pulled into my driveway that Christmas Eve, I couldn’t help but be grateful and thankful for safe travels, for a place to stay, and for a house and family to go home to. I was grateful for the opportunity that God had given me to be accepted to veterinary school and for my wonderful pets that night that helped me through a very difficult trip home even the bearded dragons.

As you create your own Christmas memories this year, consider how much we are blessed with. Be thankful that God has given us the job as caretakers of His creatures and that in return for our care, they give us never-ending love and companionship. Please consider including your pets in your celebration of the holidays this year and also remember what the holidays are about. May God bless you and your family and safe travels from the doctors and staff of the Dunkirk Animal Clinic.